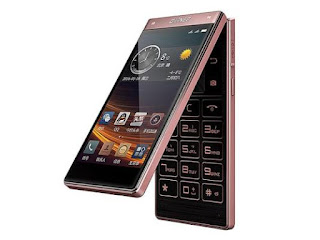 Since the Gionee W909 has a flip phone design, it comes with a T9 keypad with physical buttons to navigate.

Under the hood, the Gionee W909 comes with an octa-core Mediatek MT6755 Helio P10 processor, clubbed with 4GB of LPDDR3 RAM, an amount of memory that most high-end smartphones has.

The smartphone comes with a 64GB of built-in storage, of which 52GB is user-accessible, and it is supplemented by a Micro SD card slot up to 128GB.

Android 5.1 Lollipop powers the Gionee W909 with Gionee’s custom Amigo UI layered on top and juiced by a 2530mAh non-removable battery that should keep the lights on all day long.

Sensors on the phone include Proximity sensor, Accelerometer, along with Gyroscope.

It is only available in Rose Gold colour variant.

Will you rock this device..