Scientists at Nanyang Technological University in Singapore have unveiled "Nadine," a socially intelligent, human-looking robot complete with "her own personality, mood and emotions," according to a university news release.


The humanoid "receptionist" was presented at a new media showcase Tuesday at NTU, where her human
creator, professor Nadia Thalmann, predicted that
"physical social robots such as Nadine are poised to
become more visible in offices and homes in future."
Nadine was created to be a doppelganger of Thalmann,
according to NTU's news release, which said the
"humanoid" has "soft skin and flowing brunette hair. She smiles when greeting you, looks at you in the eye when talking, and can also shake hands with you."
The robot "can be happy or sad, depending on the
conversation" and she "also has a good memory" with the ability to recognize people she's met and remember what those people have said before, NTU said. The university added that "Nadine is powered by intelligent software similar to Apple’s Siri or Microsoft’s Cortana." 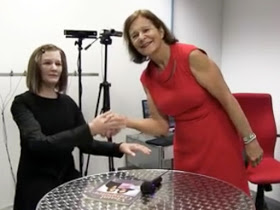