OMG!! I wanna get there too..
A Spanish billionaire just overthrew Bill Gates to become the richest man in the world for sometime, BILL is back at the top again.
It's Spanish clothing magnate Amancio Ortega, who has
overtaken Microsoft founder Bill Gates for the first
time ever.
According to Forbes' real-time tracker , the elusive
multibillionaire founder of European clothing retailer
Zara just smashed past Bill Gates to become the
wealthiest person on the planet, with a fortune of $79.8
billion (€71.83 billion or £51.84 billion).
The elusive Ortega isn't as much of a household name
as Gates, but he's quietly ascended the wealth rankings
in recent years, as his company continues to perform
well and expand.
Unlike many of the richest people in the world, Ortega
has a fascinating rags-to-riches story. Born in 1936
during the Spanish Civil War, Ortega's father earned
300 pesetas a month, a meager salary.
Ortega's biographer described his memories of a
childhood during which his family could not always
afford enough food. He left school in his early teens,
working his way up from the absolute bottom rung as a
messenger boy in a shop.
It wasn't until he was 40 years old that Ortega got
around to setting up Zara, the fast-fashion retailer that
has gone from strength to strength — first growing in
Spain, then neighbouring Portugal and France, then
London. Now it's all over the globe.
According to Forbes, Ortega's wealth rose by 5.3%,
another $4 billion, over the last 24 hours. That's partly
down to a surge in Inditex shares, the parent company
that owns Zara.
In the last 10 years, the market value of Inditex has
risen by about 570%, the main driver of Ortega's climb
up the ranks.
In an odd turn of events, Ortega has Mario Draghi to
thank for his new rank — the head of the European
Central Bank's hints that the ECB would boost its
quantitative-easing programme on Thursday sent
shares in the eurozone surging upwards. 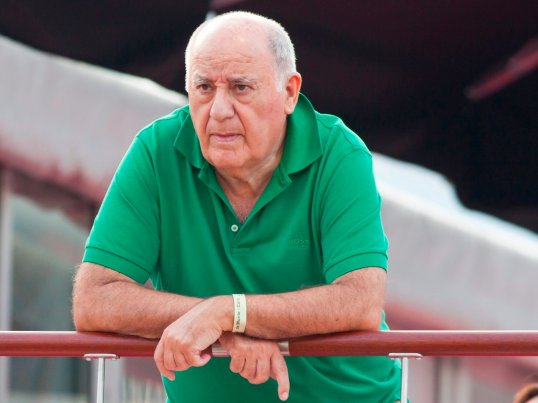