Some Few days ago, two mobile brand Launch two awesome device Tecno Camon C8 and Infinix Hot2 and I can guess that some of you are already wondering which device to go for.

I’ll quickly review the two devices in brief, and I’m pretty sure before you finish reading, you’ll have known the one to go for.


Visit our Shop online section to start buying now upto 30% off on all products!

Display Screen: Tecno Camon C8 with a display screen of 5.5 HD, vivid color, soft touch response and of cos HD screen.
While Infinix Hot2 comes with 5.0 HD with glass protection.

Advice: "If you are so crazy about Camera, pictures and selfies, I’ll advice you go for Camon C8. But if you are just so crazy about awesome spec at a lower price, receiving crazy updates on your device, then you can go for the infinix hot2". 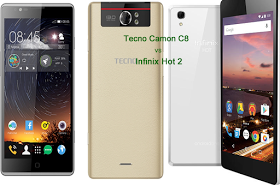